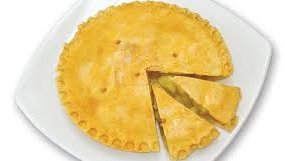 In Part I, we shared our experience on how parents make decisions to selecting high schools. Once the students graduate they are then again faced with the dilemma on what college or university they need to attend.

While looking at the investment in a child’s high school education it could run at an average of Rs. 35,000 per child per year. This translates to about USD 700-800 per child per year. This may look like peanuts to parents in the west, however this investment constitutes about 50 % of the salary of middle class families and about 20 % of the disposable income for the poor getting their children educated.

” The 2,000 working parents across were surveyed across nine cities — Delhi, Mumbai, Lucknow, Dehradun, Pune, Bangalore, Kolkata, Chennai and Chandigarh—during April and May this year. One in 10 respondents said the cost of schooling did affect the choice of school. These were parents of young enough kids who had the option of changing schools. 65 % respondents said more than 50 % of their salary was spent on their children’s education while 50 % conceded schooling was actually a ‘strain’ on the family budget.

Nearly 60 % of parents felt education had become a business and that the high tuition fees did not actually indicate the academic standards of a school. Rather, it indicated a demand-supply function so that school managements could affect erratic fee hikes every year—something parents cannot protest. Even private preparatory schools charge Rs. 25,000 a term, the survey says.”

The key finding in this study which is in line with our hypothesis was “high tuition did not actually indicate the academic standards of a school.” So in our value proposition as indicated by the business value in the project charter of Part I, we will show how parents can take a decision based on facts regarding the following:

In this treatise on graphical and statistical analysis, we will present one isolated finding over a two year period on the same schools with no significant change either in the examination curriculum or student demographics.

In this Part, we will share our analytical conclusions from our pilot study over the years 2009-2010. Our co-author has also graduated from one of the area schools chosen and is very much familiar with the systems and structure provided as part of the school infrastructure.

Data has been downloaded as shown on the logbook available each year from the resource and format indicated in Part I of this series.  Each student candidate has a score for the subjects they have taken and the associated absolute score achieved as reflected by a percentage in marks. An equivalent grade point average is also ascribed against the score based on a pre-determined cut off limit. From a value proposition point of view, our co-author and project intern has also researched and developed the following data for the corresponding schools in our analysis:

Our lead project contributor has followed the LSS DMAIC strategy in her problem solving methodology.

All analyses presented here is a sample given the brevity of this blog whereas the detailed report will be available later this summer when we publish this in a scientific journal of choice.

The basis of her analysis is supported by the GAP approach which constitutes:

Our analysis in the last section of this article is deliberately kept simple and short without going into too much statistical detail. The purpose is to enlighten our readers (who have all attended some form of school and/or college and can comprehend the barriers to making decisions in their day-to-day lives. This becomes all the more serious when they are related to the future of their children or someone close to them in their family, friends or peer network.

Figure 1: Histogram of Scores on an Individual Subject “Computer Science” 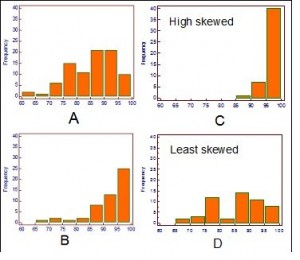 There is a general observation that students at School C were skewed toward higher computer science scores than any other school. 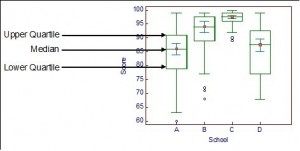 Table 1: Median Scores of Students in Computer Science at all Schools 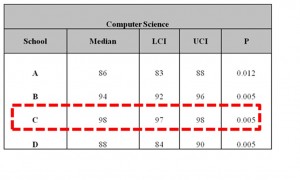 The statistical table above indicates that Students’ scores at School C were statistically different from the rest of the schools as seen by the lower confidence (LCI) and upper confidence interval (UCI) values.

Table 2: Statistics of all Students at all Schools for their Aggregate Scores 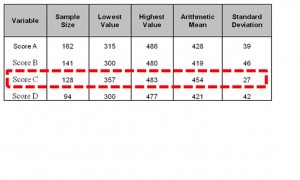 The table above indicates that although Students’ aggregate scores at School C were statistically unique in their highest mean, there were students from other schools who also fell within the same range as School C. This tells us that School choice alone doesn’t necessarily mean a higher score for the individual student. One has to understand what is beneath the level of school and student that makes this possible. It does point out that the variation in aggregate scores were the least for School C leading us to believe that they post a higher consistency among their students.

Figure 3: Box Plot of Aggregate Scores of all Students from all Schools 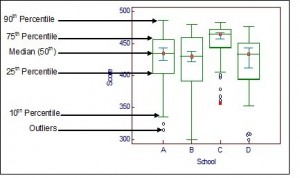 This is also illustrated in the box plot for the aggregate score of all Schools where the median for School C is uniquely different from the 3 other Schools.

The statistical table from above shows that “School C” is mutually exclusive from all the three other schools for the aggregate scores of all subjects put together.

Table 4: Overall Statistical Summary for all Subject Scores in all Schools 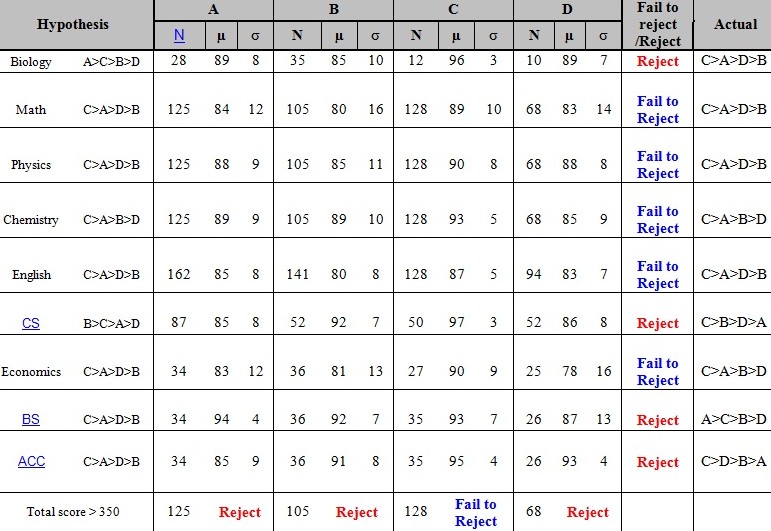 Figure 4: Spider Chart of Commute Distance for all Schools 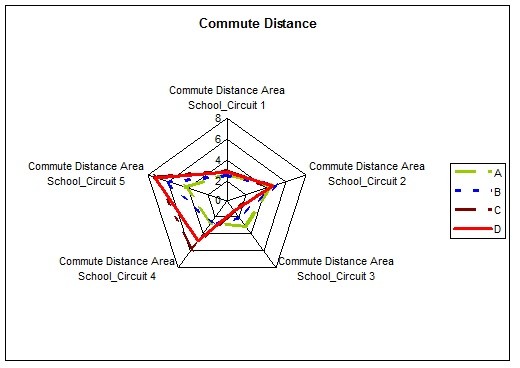 This spider chart shows that the commute distance is the longest for School D.

Figure 5: Spider Chart of Commute Distance for all Schools 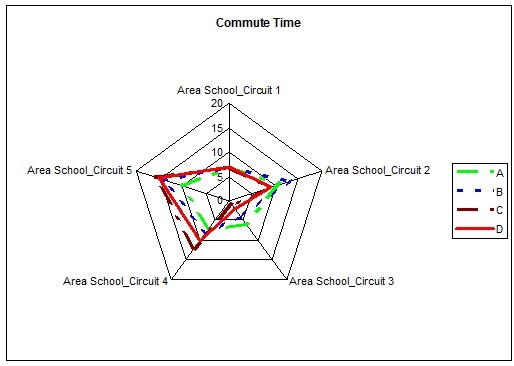 The commute time to school and back is varying by the region and school location.

Table 5: Probability of 25th Percentile to Qualify for Admission to any Program

Table 6: Probability of 25th Percentile to Qualify for admission to the ECE Program

Tables 5 and 6 above, show an estimate of the probability of the 25th percentile qualifying for the minimum cut off as stipulated by a local university for its most popular engineering program.

While all schools display a low probability, School C does stand out uniquely and poses the highest probability of a student gaining admission into this engineering program. The lower table estimates the probability of any student from the school making it into the most popular program (Electronics and Electrical Communications).  It shows that while all other schools are teetering below 1 %, School C has an 8 % probability for a successful admission.

Figure 6: Spider Chart on Tuition fees (INR) for all Schools 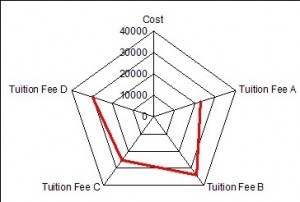 This spider chart tells us although School C came out as a unique environment to seek the highest probability and median score, it was associated with the least in tuition fees. This also agrees with the national survey on how higher tuition didn’t necessarily reflect a better academic performance of the students in a particular school.

Figure 7: Probability of Admission into the CE Program for years 2009 and 2010 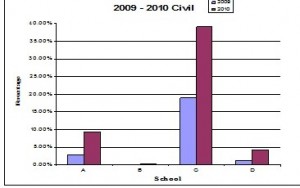 This bar graph compares the shift in probability of qualifying shift for a specific program (Civil Engineering – CE) for the students at different schools. The probability seems to have increased for Schools A, C, and D (School B is not even on the charts bearing a low probability for 2009 and 2010), while School C expectantly showing the highest increase as well as the highest among all schools.

In this article we have concluded that while the 4 Schools in our pilot study showed variation in student performance by subject as well as aggregate scores in their final examination there were some unexpected conclusions even in our limited scope of study:

We have an opportunity to investigate at the operational level of students to integrate a higher scope and truly understand the root causes of student success by mere final examination scores. Most parents in the east elect this as a decision criterion as it correlates well with the success of college admission in the eastern continents.

In Part III we will showcase the success of the project lead contributor on how she predicted her examination and mid-term test scores to decrease the time she devoted toward study time in a given semester of study at college. The student has more time in a day to engage in activity that is not academic in nature.