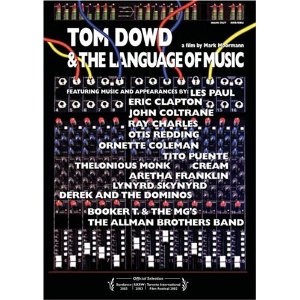 For years, I’ve been pointing development and project managers to the full-length documentary, Tom Dowd & the Language of Music. (It’s rentable via Netflix, purchasable via Amazon.)

Tom Dowd, an innovative music producer and recording engineer for over half a century, altered the course of contemporary music not only through his many technical achievements but also through his ability to coach some of the greatest musicians of our lifetimes, including Eric Clapton, the Allman Brothers, Lynyrd Skynyrd, Aretha Franklin, Ray Charles, Marshall Tucker, The Drifters and many, many more.

To accomplish with programming teams what Tom Dowd accomplished with rock and roll musicians is a goal I have long strived for.

As a bit more background, Tom Dowd was employed at 16 to do math for, unbeknownst to him, the WWII atom bomb project – the Manhattan Project – because they figured they’d get at least two years of engineering and math from his young mind before he risked being drafted. He was such a part of that project by the time he turned 18 that while he was sent off to basic training, he was immediately returned to NYC to continue calculating. But when the war ended, there was no segue to a nuclear physics career – Tom Dowd knew more than the academics he would have had to study from! In frustration, he turned his engineering ability to his other love, music. It was a time when groups went into the studio and laid down an entire album in an afternoon, each song a single monaural track. He was hired into Atlantic Records as a recording engineer. He continued to engineer, mix and produce music until his death in 2002.

His engineering prowess combined with his musical ear to give him a ticket to play. He was one of the first to lay down increasing numbers of separate tracks. (An actor portrays Tom Dowd in the Ray Charles movie: at the sound board, Dowd not only mixed but invented the overlays and the engineering that Ray Charles needed.)

As Dowd’s coaching skills developed, he became responsible for some of the great collaborations in music. When Cream was having trouble bringing their individual parts together in “In the Sunshine of Your Love”, it was Dowd who pointed them to the beat change that brought the piece to life and fame. And it was Tom Dowd who introduced Duane Allman and Eric Clapton, resulting in their classic Derek and the Dominos collaboration, Layla.

From the first days of programming, the crossover between programmers and musicians has long been noted. Mickey and I discuss it in our book, Managing the Unmanageable: Rules, Tools, and Insights for Managing Software People and Teams. (Mickey was a professional musician himself, once, and still makes command performances for family and friends; and I had years of training in piano, trumpet and guitar.)

But the management crossover – the similarity between orchestrating programmers and orchestrating musicians – hasn’t been as obvious, as written about or as noted.

Eric Clapton appears in the documentary to give voice to the contribution made by his producer. “The quality and the success of those recordings could mostly be laid at the doorstep of Tom Dowd.”

Butch Trucks, drummer of the Allman Brothers, says, “Tom had a way of making things work – had a way of pulling us together – being this father figure and this psychologist that would dig into the depths of us and find what we were capable of doing.”

From one of the members of Lynyrd Skynyrd, “He could bring the best out of you without you ever knowing it and all of a sudden, wow, there it is.”

Again, Eric Clapton: “I’ve always been riddled with self-doubt about my work, especially as a composer…. His role was making me feel comfortable and inspiring confidence in myself.”

One of Dowd’s colleagues said, “He’s a coach. He’s the absolute perfect coach.”

For those of us eager to have that kind of impact in software, Tom Dowd and the Language of Music is a movie worth watching.