My wife, Karen, and I recently relocated from the Silicon Valley to the Olympic Peninsula in Washington state. The process of selling a home, finding a rental here, and moving all of our belongings, including a 250+ potted plant collection, took seven months and was nothing short of excruciating. Having successfully completed the move phase, and being gluttons for punishment, we immediately started building a greenhouse to protect Karen’s precious babies from the colder weather of the Northwest. The process of procuring and building our greenhouse ‘kit’ have given me some very concrete (literally, in one case), examples of some of the most important elements of a successful project.

The elements that came to mind are: start with a good plan, build a great foundation, assemble the right team, solve problems creatively, celebrate successes, set clear goals, and be realistic with your schedule. In Part 1, I’ll cover the first four. Part 2 will cover the rest.

Let me start by saying that we had never built a greenhouse before. We have remodeled our previous home in San Jose several times, but have never built a grounds-up greenhouse of aluminum and glass. Thus, the project has been full of new learnings and challenges, not unlike the typical project in high-tech Silicon Valley.  I’ll go through each of the elements listed and give examples from our project.

Start with a good plan

We didn’t plan this project in the traditional sense of a detailed WBS schedule with clear milestones. All we knew was we needed a greenhouse, a big one, and fast, as we only had a few months to get it built and move Karen’s plants inside before the first freeze. We spent much time researching kits online and settled on one from BC Greenhouses in BC, Canada. They met our price and quality goals and had a good reputation. In hindsight, we should have spent more time planning the steps to build, plus think about the other elements that would affect the total installed cost. Since starting the project, we have had to add an LP gas tank, power, internal wiring, plumbing, backup generator, excavation and foundation work. Taken together, these have nearly doubled the cost of the project (sound familiar). Needless to say, our budget is blown, but that is a topic for another time.

Lesson: the number of surprises (cost, time and technical) encountered will be inversely proportional to the amount of time you spend planning.

We were very lucky when we found our foundation company (Hans Vodder Construction). It turns out they are widely known in the area as the best of the best. We have not been disappointed in the least.  They were meticulous in ever detail of their work. They even took the initiative to request engineering drawings from the greenhouse company before they started. The end result was, as far as we were able to measure, an absolutely perfect platform on 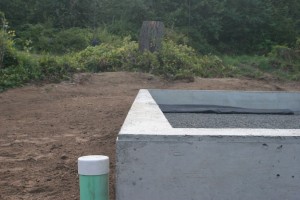 which to build a structure. As a result of this ‘solid foundation’, we were been able to enjoy assembling most of the greenhouse kit  without resorting to shims, filing, bending, or cursing. Each day we commented on how great it was to have such a perfect platform on which to build the rest.

Lesson: with a great foundation for your project, all the next layers will fit and be much more stable, saving countless hours of frustration and needless costs. Spend the time up-front. You will make it up during the project.

This is an area where we had very little flexibility. With a limited budget (isn’t it always?), our team for the structure build-out was only the two of us. My wife is amazing, and I think I’m not bad with assembling stuff, so we both figured we could do the job. Well, as expected with any project, we had resource problems. Early in the project, my wife fell and broke several

ribs. Later in the project, my back gave out from too much heavy lifting and bending. Fortunately, as evidenced by the fact we are still married, we didn’t have to endure a common resource problem: turnover. So, we started with two able bodies and ended with about one between the two of us. Given that this greenhouse is 600 square feet in area and 16 feet tall and consists of 6,000 lbs of aluminum and glass parts, it turned out we were seriously under-staffed for this project. And, we had a project deadline that was unalterable, as it is determined by Mother Nature.

Lesson: Staff appropriately for the schedule and have contingency plans for unexpected resource problems!

The greenhouse kit we purchased went together in stages, which are documented  in the drawings and instructions that accompanied the kit. Unfortunately, some of the instructions were not applicable to our kit, as we ordered a fairly uncommon collection of features. And, a 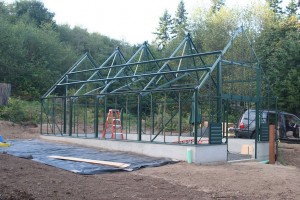 few of the assembly steps were geared for a much smaller structure. With our tall model, and especially because there were only the two of us, we found ourselves scratching our heads a lot with questions like, “How in the heck are going to lift that 175 pound truss into place? We had hundreds of discussions with each other trying to come up with creative ways to assemble a given element. If we had another four strong people to help, it would have gone together much faster.

Lesson: No matter how impossible it may seem at the outset, most any prolem can be solved, given enough time, creativity, and that good ole can-do attitude.

Next post I’ll cover he last three: celebrate successes, set clear goals, and be realistic with your schedule.