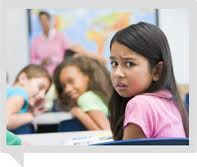 Bullies both scare and fascinate me.  Observing both the child bully and the adult bully, it is interesting to see how their techniques become more sophisticated as the bully matures. Also, it is interesting to see how later sophistication is still based fundamentally on playground behavior.  I will describe two hauntingly similar scenarios, one involving children and one involving adult co-workers.

I was watching a group of kids interacting, and one of the kids, slightly older, was bullying the other two kids to go along with what he wanted to do.  The younger kids did not want to do it and were resisting. The situation was escalating.  I approached to intervene and the older kid redirected and started calling me names.  The other two kids, relieved not to be the object of the bully’s attention, joined the bully and started to parrot him in name calling.  I knew these two kids and had never seen them behave this way.  The bully had recruited them and formed a gang directed at me.  I was startled and fascinated by how quickly this happened. These kids were 4 and 5 years old.

I had joined a larger company, and I was the new kid on the management team. After a meeting, I approached a senior exec with an idea that I had.  He did not seem to react one way or the other to the idea, so I let it be.  Later, I found out that this exec (COO, mind you) had gone back to his desk, wrote an email deriding me and my idea and sent it to all his staff members, thereby starting a long thread  with his minions chiming in.  A friendly messenger was finally dispatched to forward the email to me. Again, I was startled and fascinated by how quickly the bully did rally his gang.

The common thing about both these incidents is that I had threatened the domain that each bully was attempting to secure.  In doing so, it triggered a defensive reaction in the bully to rally his troops and defeat the threat. In both cases, the bullies created an environment of Us versus Them to clearly draw lines, and the bully used derision as the tool for creating that environment.  I am reminded of the scene in Harry Potter 3 where Professor Lupin teaches his class how to defeat the Boggart.  The Boggart comes out of the closet in some fearful form, and the witch or wizard, with a clear vision of how to humiliate the Boggart, invokes the word “Riddikulus,” and  waves a wand, which then transforms the Boggart into a laughing stock for all. The Bully is a master of the Riddikulus spell.

2 thoughts on “Bully by Experience”