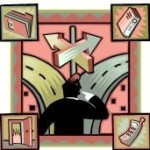 This person “says” he feels bad about owing the money.

This person “says” he is sincere in paying back the money.

This person “says” he can do this, that, this to collect the required money.

What is stopping this person from making progress?

What is stopping him from being successful?

Well – he is waiting to make sure he can be successful before he takes action.

At an early meeting, he said that he could collect $10,000 within 30 days by selling his car, truck, borrowing from family and friends, etc.   This $10,000 would go a long way in settling his debt and leaving the remaining amount to be covered in a reasonable payment plan.  He was asked to sign a payment plan.  At that time, he didn’t feel confident that he could actually do it.  So he refused to sign and proposed another meeting 2 weeks later (which he failed to attend).

He finally responds to the numerous calls/emails to schedule another meeting (this time 4 weeks out). He again fails to attend that meeting.   He continues to postpone the cure for what ails him.

A total of 8 weeks later – he is in the same boat.  He has the same mental plan of where he could get the money, but doesn’t feel confident enough to make it official.  Signing this payment plan would stop a pending law suit.  When asked, “What happened to his plan to collect the $10,000 within 30 days (now that 8 weeks have passed)?”

“Well – I didn’t want to start collecting and paying it back until I  officially signed the document.”

“Then, why didn’t you sign that payment plan to make it official so that you can start paying it back?”

“I didn’t want to sign it until I was confident that I could do it.”

Flawed Premise 1:  I can’t start paying you because I haven’t  signed payment schedule.

There’s no special  “starter pistol” that someone else triggers or controls  for you.

You never need a “signed document” to do the right thing.  In this example, everyone is in agreement that he owes the money.  There’s no ambiguity on what needs to happen.   The legal incentive  came into the picture only because he wasn’t taking the responsibility for his debt seriously.

In the 8 weeks,  he took no tangible  steps to increase his confidence in his plan.  He did not sell his car or truck.  He did not talk to folks about the loans.   He just continued to avoid meetings and phone calls.

If he actually had followed through on the steps he proposed 8 weeks ago, he would have been able to return some amount of money and would have increased his confidence that he could can make the remaining payments.  The lack of action did nothing to reduce his debt but did dramatically increase his stress.

You can never be 100% confident in a plan because the execution of that plan is in the future.

If you don’t know if this or that will work — EXPERIMENT.  No one is born an expert. Experimentation and  experiences produces experts.  But sitting on one’s hands just keeps your hands warm and you in one place.

Every decision or plan you make is “doable” — as long as you do it.  You can easily respond and react appropriate to what ever results you get.    The sooner you execute on your steps, the sooner you can get the results and be able to alter and modify with whatever unfolds.

If he had actually started on his plan (independent of whether he signed) he would have increased his confidence in his plan, reduced his debt and improved his reliability and  integrity.

Flawed Premise 3:  If I ignore it, it will go away.

Don’t worry.  If you don’t do anything about a problem, it will get bigger.  Avoiding the phone calls and failure to appear at negotiation meetings just escalated the issue.  Best to take responsibility for your actions.  People can appreciate your situation, if they see tangible results and actions.  If the gentleman had actually started a payment schedule (long before legal steps were taken),  instead of empty promises and avoidance, he would have been in a much better situation.

Take an attitude of “progressive refinement” toward your projects.

Waiting to take action until your sure about the outcome of the action is a losing strategy.   You can never be 100% sure of the results, because the results are “future based”.  Best recommendation is to actually experiment or do the activities that will increase your confidence in your decision.  Once you start on your path (by doing the activities) you can always adjust and re-evaluate to stay on target.  You will be constantly moving toward your target.

Take an attitude of “progressive refinement” on your project plans (fixing and refining as you go).  Although strange things will occur during the journey, the solutions to those items will also appear along the same path.  Therefore, you will be able to handle them along the way — as long as you start the journey.