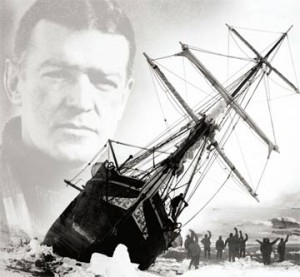 Scrappy Project Management Mindset Series – Part 4 of 4. If you’re going to lead projects to success you’ve gotta have a powerful mindset that supports you. This week I’ll share some mindset medicine that will keep you scrappy. – Kimberly

My favorite story of total commitment is that of Sir Ernest Shakleton, who led his crew through a survival ordeal lasting roughly 18 months after their ship was trapped in the Antarctic ice during their 1914 expedition. Shakleton doggedly committed to leading all of his men to safety in spite of seemingly insurmountable odds, and then proceeded to do precisely that through a string of feats each more unlikely than the last. After reading the short summary of their harrowing adventure I was left in awe of his leadership and extremely grateful not to be living on an iceberg subsisting on penguins.

Shakleton and his men couldn’t possibly know how they were going to survive their ordeal. And they certainly had to be aware of how dire their circumstances were. After all, the ad recruiting them had read “Men wanted for hazardous journey. Small wages. Bitter cold. Long months of complete darkness. Constant danger. Safe return doubtful. Honour and recognition in case of success.” And yet, without knowing how exactly they might achieve survival, their leader committed to that result. Of course the alternative was death for some or all, so perhaps it was easy to make this commitment in the absence of any evidence it was possible to keep it.

But project leaders can take a lesson from Sir Ernest. While it’s completely normal to wonder how in the world we’ll achieve some extraordinary project when we’re first confronted with the challenge, that’s no reason to shy away form committing to finding a way. Uncertainty is uncomfortable, and many of us hesitate to make commitments that we’re not sure we can keep. And neuroscientists have recently revealed that uncertainty lights up parts of the brain similar to those sparked by physical pain. But, as a professional project leader we need to overcome our animal tendency to shy away from uncertainty. Instead we need to embrace the inevitableness of risk and uncertainty in our projects, and balance those unavoidable influences with a greater measure of commitment to finding a way to achieve what seems impossible, but frequently will be shown to be merely difficult. That’s what one of my mentors called “The Power of Ambiguous Commitment.”

In the early stages of a complex project there is a great deal of uncertainty. But that’s no excuse for padding our commitments with caveats just in case we’re not able to get the job done. Intention precedes creation! Thought creates reality, and action transforms the impossible into the “merely difficult”, and eventually the inevitable. Totally commit and then find a way!

Want to get even scrappier? Check out all 5 “Scrappy Guides“, including August’s Scrappy Women in Business by me and 11 gal pals,  Scrappy General Management by Michael Horton, released in October, and Scrappy Business Contingency Planning by Michael Seese, released in November 2010.