Our economy is enormous and is still the envy of much of the world, despite our decaying financial condition. How best to improve our economy in the long-term? I suggest the answer has little to do with stimulus spending or reductions in the size of government. Depending on your view, these variables might have an impact – though not nearly the long-term punch provided by my favorite recipe for economic recovery: the elimination of youth soccer from the United States!

Youth soccer is but one example, of course. The real underlying culprit is our suicidal belief that every kid deserves a trophy. The adult version of this mental disease is the belief that every employee deserves recognition as a super performer. Witness the unending number of 8.5 x 11 laser printer-created certificates strewn like graffiti across cube land. A generation of soccer kids who were all told they are number one now dominates the modern workplace – and they want their trophy!

The problem is our flawed definition of the word “fair.” Many people believe the Golden Rule will suffice. That is a horribly misguided notion. Don’t treat others as you wish to be treated. Treat them as they deserve to be treated within the relevant performance context. Others believe that to be fair means to treat everyone the same. This is the most common mental error I see in practice. That is a poor definition and it is a major contributor to mediocrity in organizations.

My belief is that we must treat people the same and not the same at the same time. Let me explain.

We treat people the same by providing a positive and transparent workplace. Both are huge words in my world. A positive workplace is one where, on average, relationships are civil and congenial and even a bit warm. A transparent workplace is one in which decisions are made openly and how resources are allocated is known and above board. This is in contrast to a workplace where decision ownership is unclear and politics or other less than meritorious realities explain how things get done.

We treat people not the same by clearly recognizing and rewarding contingent on performance. We differentiate based on performance! This simple maxim is too often ignored due to a false definition of fair, a desire to avoid conflict, etc. All recognition and reward should be clearly tied to worthwhile performance incidents.

Here’s the thing: if you have a legitimately positive and transparent workplace (about 30% of organizations in my estimation), you need not give everyone a trophy every week! Ignore this advice and watch your A Players flee and your quality B Players grow a sense of entitlement that is terribly difficult to shake. If you will cling to the magic phrase, “contingent on performance,” over time it will become the definition of fair.

Imagine the innovation that will manifest when the next generation of US workers clearly understands “contingent on performance” and the need to earn praise through excellence. I have two boys, ages four and eight. I pledge to start with them. Won’t you join me? Love your children passionately, but allow them to realize they are not always going to win a trophy. You will not only be preparing them for adulthood, you might just be helping the economy too. 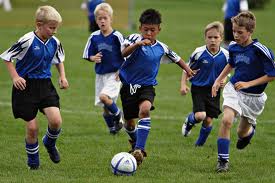 1 thought on “Soccer has Ruined America”