One of your responsibilities as Project Manager is to ensure project milestones are being met, and that everyone is on task and on track. One way of doing that is by holding status meetings with your teams. However, as you may have experienced, sometimes those meetings can go awry – and most of the time it’s completely unintentional.

For example, in the meeting you turn to George, one of your team members, and ask him to report on a task he was given responsibility to complete, and it hasn’t been done yet. Immediately, he seemingly goes on the defensive, providing reasons why he was unable to complete the task as expected. “You know, my manager had me on a special project this week, and it really prevented me from spending the time I needed on this. Plus, I had to miss a day because my kid was sick. You know it just hasn’t been a very good week.”

You respond, “Well, when do you think you can get it done?” Not really thinking that he’ll see that as a challenge. For the next few minutes you engage in a circular conversation, not really getting anywhere, and both of you seem to be getting a little combative. You didn’t imagine things could go so wrong when all you wanted was to get a simple status update.

In his mind, George’s credibility on the project team is being challenged. This belief threatens one of his most valued possessions: his status. For many of us, status is a major driver of our social behavior. The equivalent need that is being threatened is Significance, the need to be seen as important, having an impact. (See my recent article, “Building Breakthrough Teams,” August 8, 2011) Most people will go to great lengths to protect or even increase their status on the team. And any perceived threat to it will almost certainly elicit a negative response. 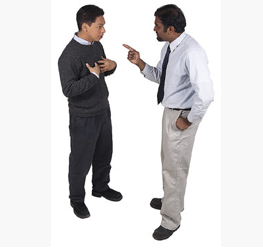 It’s funny because when you think about it, status explains why we love to win arguments – even pointless ones. It also explains why online gaming is so big, because it has no other obvious benefit than to raise the status of a player in comparison to others, or why we buy a specific type of car, or brand of clothing. In his book, “Your Brain at Work,” David Rock explains that while status is a relative term, we gain a sense of reward anytime we feel as though we’re “better off” than someone else. Studies have shown that as we communicate with others, we create a representation of the other person’s status in our own brain, which then influences how we interact with them.

The concept of status is certainly reinforced in most organizations. They set up clearly delineated hierarchies, with roles typically defined in a top-down fashion. Then, the employees work to climb the corporate ladder, as it were, and as they climb each successive rung, their own sense of status increases accordingly.

The thing about it is that you define the parameters for your own sense of status, and as your perceived sense of status increases or decreases, you can experience an intense emotional response. Status is relevant at both an individual and group level, and impacts behaviors on both levels. Now please understand I’m not saying that the drive for status is a bad thing. Far from it. The drive to increase our status can be responsible for amazing achievements in our personal and professional lives. It’s the drive for status at all cost that can create unwanted or even destructive behaviors.

As scientists discover more about how our brains experience the world and make neural connections, we have the opportunity to understand on deeper levels just how our brains perceive emotional stimuli. For example, the feeling of being left out, rejected, or being wrong is physiologically painful for us. This feeling of being “less than” actually activates the same part of the brain as when we experience physical pain!

Because of this connection, and the associated pain, most people will go to great lengths to prevent this loss of status from occurring, even if it means lying to themselves or acting in ways that are counter to their value system. I have said many times in my coaching career that people will step on their own values in order to meet their needs, especially when operating in what I refer to as autopilot or automatic mode.

The competition that we see in so many organizations and project teams can have a negative impact on status. In this game, for me to “win,” someone else has to “lose.” This makes team members tend to see each other as a threat rather than a colleague or potential source of help. Have you ever experienced that feeling? This feeling can significantly impact the ability of your team to connect.

There are strategies for compensating for the perceived battle to maintain one’s status. One is to show your own vulnerability, which may include the admission of your own difficulties or challenges in keeping up with project requirements. This serves to bring you down off any apparent pedestal with your project team or a specific individual, thereby making you less of a threat.

Another strategy is to praise the other person publicly prior to asking about an issue that can be seen as a challenge. For example, tell them what a great job they did on the report you asked them to produce, and let them know how much it was appreciated. This elevation in their status can offset the potential for a negative response when you ask about the unfinished task. By managing the potential for conflict from status issues, you help yourself to make better decisions, you reduce the pressure on your leadership, and you create better connections with your team.

So, is status important? Only as important as you decide to make it.