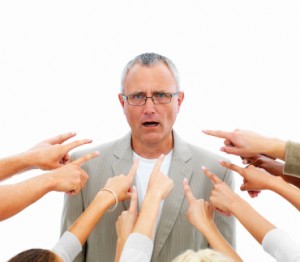 Key success behavior #3:  Don’t blame others.  It’s not that other people aren’t responsible for a lot of the crap that you have to clean up as a project leader.  It’s just that blaming them doesn’t help fix the situation, and worse – it diminishes your personal power.  I have continued to lead projects only because I operate under the extremely powerful illusion that I have an impact on what happens around me.  Certainly I’m frequently sorely tempted to blame other people, and sometimes I do  (especially family members, but in the case of family it really IS their fault, after all).  Blaming others gives away my power, increases my sense of helplessness, irritates the other person, and always makes things worse.

There’s a little mental gymnastics exercise that I do in order to avoid blaming others.  If you’re clever you can always think of ways to take responsibility for what happens in your project, and in your life.  For example:

– a customer is unhappy with the product or service your team delivered?  Perhaps you should have included them in the requirements definition or early phase testing in order to assure that the requirements matched what they really wanted.

– a vendor didn’t deliver the right parts during a critical prototype build?  Perhaps you didn’t clarify the specifications sufficiently, or maybe you should have asked for a first article sample earlier to assure you were getting what you needed.

– a critical piece of the software causes a killer bug in the product that was supposed to release this week?  Perhaps earlier integration testing would have surfaced the system-level problem before it became a crisis.

– an executive didn’t give you the time or people you needed to get the project done on time with the quality required, pressured you to release before it was ready, and now that the product is launched it is a disaster?  Perhaps you didn’t make a compelling case for the resources, or maybe you should have refused to release the product, or quit your job, or laid your body in front of the shipping dock, or unplugged the development server and hid it in your car trunk.

You get the picture.  The point is to take responsibility for what happens, even if in your heart of hearts you believe some incompetent boob is to blame.

Oh, and lest I forget, the easiest people to blame are senior executives.  I have to admit that, in the past, I myself have derived a great deal of satisfaction from waggling my index finger and “tisk, tisk, tisking” executives I thought were leading in a pathetic fashion.  But when I became a senior executive I realized that it’s a lot more complicated than I realized to lead effectively.  There are oodles of constraints, plenty of issues you can’t talk about with your people, unimaginable pressures, and you’re a human being, too, by the way, no matter what rumors may be spreading about your paternity.

Don’t blame others.  Just don’t go there.  The damage to your power as a leader will linger long after the transitory satisfaction of telling some idiot what you really think of them passes.