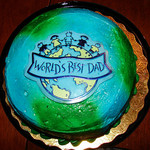 I’d like to take this opportunity to introduce my father to you, but I can’t. In the past three years, people have asked me why I haven’t been writing or blogging. I have a simple answer – my father passed away. He was of  Jewish descent, one of only two survivors in his family who escaped Germany to America during World War II.

This is a very tough post to write because it’s intensely personal; however, much of what I’ve been involved with since and thought about has revolved around this fact. My dad was the sun, the moon, and the stars to me; when he went away, my world went dark. It has only been in the last six months or so that I’ve felt as if I’m finally emerging from my shell and the darkness has lifted.

Over the course of time, we model our behavior based on who we admire as leaders. I have several product and project management mentors, but the person I most try to emulate remains my father. Leadership is managing relationships, and project management as a whole (although we try to make it about scope, cost, and time; analysis and metrics; quantifying value) involves people – leading them, motivating team members, collaborating and facilitating discussion, creating the best possible environment and culture so that the best work can be done. I’ve taken many courses over the years in all the various PMBOK areas; you can use waterfall, Agile, Six Sigma, CMMI, ITIL, etc…, but it always comes down to the human interactions – people working together in concert to accomplish a common goal and delivery quality projects or products, depending on what’s needed. So as a project manager or ScrumMaster, whether it’s between myself and the team, or between team members by helping them to overcome their differences – it all boils down to how we as collaborative, servant leaders manage relationships.

At first glance, my dad was not the kind of person one thinks of as a leader. He was shy, self-effacing, and an introvert. He was also, however, a great small-talk artist and could talk about anything in the world to anyone. My father was an amazing listener, and had this way of making you feel like what you were saying was the most important thing in the world by the way he listened, asked questions, and interacted with you. When I was a child growing up in Tokyo, I marveled at not just all the relatives, but the many lifelong friends my father had cultivated strong relationships with. In group situations, he wasn’t the guy cracking the best jokes or telling the tall tales. He was content to play second fiddle to the person who grabbed the spotlight. He was the magician behind the curtain. People gravitated toward him, and as the only foreigner in the office managing a group of Japanese businessmen (and struggling to speak their language), he still managed to gain their respect and admiration. He was the kind of guy you wanted on a team because not only was he a hard worker and team player, he was the “glue” that held everything together.

When he passed away, people came from all over the world and sent their condolences. The relatives on my dad’s side of the family paid me the highest compliment that anyone has ever given me – “You’re just like your father; you see things from other people’s points of view; you’ve got that way with people.” Honestly, if I am even half of what my dad was as a person, I’d be ecstatic. He was human and made mistakes like we all do, and I for one have definitely made plenty and will make plenty more. As I look back at what has happened since my dad’s death and reflect on what my cousins told me,  I realize that my philosophy and work have taken on a much richer and deeper meaning, particularly regarding the relationships we build at work and in life.

It’s vital to nurture relationships, whether they be professional or personal, since we’re all much more connected in today’s technologically-focused world. As human beings we don’t exist in a void; we need each other and as a race, we function better in tribes and communities – so why not invest the time and care in our dealings with one another? No man is an island, as they say.

As a product/project manager these days, I strive to be good at what I do; I try very hard to consider my team members’  perspectives in negotiating with senior management; I aim to help create the best possible safe and open environment so people can do their best work. If we as project managers can  help the team become more productive and high-performing as well as help nurture and foster a culture of trust, teamwork, and pride in group accomplishment, I believe we’ve earned our seats at the table.

I hope we all have role models and people we strive to model our behavior – and you’re all as lucky and blessed as I have been. Daddy, thanks for giving me the best example I could ever have had, in terms of being an authentic friend and relationship builder.  I think about you each and every day, and will love and cherish you always.

9 thoughts on “Leadership is Managing Relationships”