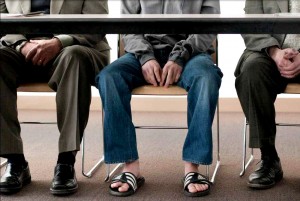 This is the final post in my series exploring post-quake Japan.

While I’ve enjoyed many aspects of working with Japanese companies in recent years, one issue that’s been a frequent cause of consternation is what I perceive to be their relatively slow pace of change. OK, to be perfectly honest I’m not impressed with the speed of change in the corporate world in general, but in Japan I’ve sometimes experienced it as positively glacial. I feel this especially keenly when suggesting changes related to technology and tools that seem common place from my vantage point in Silicon Valley, California, a hotbed of innovation. Social systems like Twitter, Facebook and LinkedIn seem indispensable to daily life. Social media marketing and open innovation seem to me to be standard practice for successful businesses. And wearing casual clothing at work – well, what else WOULD we wear?!!

By comparison, business culture in Japan and elsewhere seems to change at a more leisurelly pace. (Today when over half of the Fortune 500 companies have a Facebook page, many people still view this tool as a toy for teenagers.) But an event like the triple tragedy experienced in Japan on March 11 this year can create an opening for rapid change. In pursuit of reduced electricity consumption, many businesses in Japan have adopted “cool biz” dress standards. Although Japanese businessmen won’t be coming to work in shorts, sandals and a T-shirt Silicon Valley style anytime soon, the ocean of dark suited men streaming through the streets of Shimbashi will include a higher percentage of people without neckties or jackets. Instead they’ll be sporting neatly pressed short sleeved shirts and business casual pants (most probably still within a narrow range of colors that men worldwide seem to prefer – white, black, brown, gray and blue).

The sense of urgency to reduce power consumption has also opened a door to more flexibility in work starting time, and more acceptance of working from home. These might seem like small shifts to those of us working in more flexible environments, but these are enormous changes for many Japanese businesses.

Maybe these changes are purely practical responses to the clear necessity of reducing power consumption, and perhaps they’ll change back once full power is available, but I don’t think so. In my opinion many people working in Japanese companies crave such changes, and it will be difficult to reverse the trend once people adapt to a new norm. The crisis is real, but it’s also a tremendous opportunity to rapidly shift culture and convention in a new direction. What was unacceptable – even unthinkable – in the past can now become “normal” – the “new normal” as some people in Tokyo are calling it. These rapid changes have inspired me to look for other opportunities that can be piggybacked on this wave of change.

One of my business mentors often encourages me to opportunistically align my own transformational change efforts with trends sweeping through an organization. He recommends such alignment as an excellent way to transform a corporate culture without the resistance and personal risk typically associated with championing change.

Perhaps this experience of rapid change in post-quake Japan will teach me the wisdom of surfing vs. thrashing my way to transformation. Maybe I can even learn ways to create rapid, widespread change without a disaster!