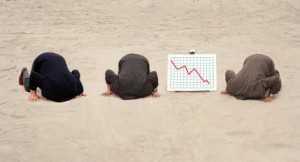 This is an extension of my last blog about “Don’t Blame Others”.  Today I am not only urging you not to blame other people – don’t play the victim by blaming anything at all for your problems and failures.  For many years I thought that my troubles were caused by external forces.  My career didn’t progress the way I’d hoped, I didn’t get that promotion I thought I deserved, or my success in leading a project wasn’t rewarded the way I thought it would be.  I honestly believed that I was a victim of bad treatment, bad timing, or at the very least, bad luck.  As a result I was not motivated to take any action on my own behalf.  Rather I nursed my wounds and waited for things to get better.  And I repeated my victim story for anyone who would listen.  (Honestly, it bores even me to tears now.)

Human beings always seem to come up with “reasons”, “stories”, “explanations”, or “excuses” when we ourselves fall short in some way.  This tends to become a habit when we give up the belief that we are responsible for what happens in our projects, our work, and our lives. For example, I frequently have a repeated argument with a dear friend about whether his positive intention balances out his negative impact.  He’s not responsible for his impact as long as he’s got good intentions.  Business leaders often bemoan the economic situation or exchange rate issues as causes of their business failures.  How can they be held accountable for things so far outside of their control?  And project managers sometimes make a habit of attributing setbacks to difficult customers, vendors, team members, or bad luck.  After all, we were doing our best.  It’s not our fault.

Key success behavior #4:  Don’t play the victim!  When you do you give up your power.  We all make up stories to understand and explain what happens to us.  But see them for what they are, a story, not the truth.  Even when they are “true” . . . don’t give up your power by dwelling on these “stories”.  If there’s something you can do about, get busy and do it!

No doubt there’s an element of truth to any explanation that blames external forces when we get bad results on a project, or in our lives in general.  But I suggest that you operate under the illusion that you have the power to make a difference in what is happening, even if only by changing your attitude.  I’m not saying to ignore cause and effect or “lessons learned”.  Sure, ask “why” five times”, and do a root cause analysis until the cows come home, but don’t indulge in repeatedly telling the story about how your problems are due to something or someone else.  Even if it is true that you are not responsible AT ALL for what happens, that’s a very dangerous story to buy in to.

Don’t believe me.  Just play the victim for a couple of decades and let me know how it works out.  In fact, there’s a perfect opportunity for every American to do this right now.  In spite of the fact that we bath in water clean enough to drink, and, as a society, enjoy a quality of life unheard of for a good chunk of the world’s population, there are still plenty of people telling the victim’s story within earshot.  Personally, I prefer the illusion that I can make a positive difference, if only by changing my attitude.  And when you catch me whining on and on with some victim-hood rant, please tell me to stuff it!