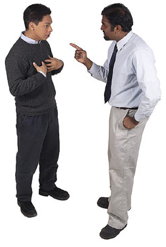 It seems like I’m talking and writing about change quite a lot these days. And there’s good reason for that. It’s an inescapable part of our lives. And we still resist.

I remember sitting through a staff meeting back when I was in my corporate job, listening to my boss run through a series of issues, update the status on a few large initiatives, and then to close, he told the staff that “things around here are going to have to change.” Well, that sounds subtly threatening.

In effect, what he was really saying was, “All of you have to change.” At least, that is exactly what many of us in the room heard him saying.

Probably not the best way to deliver that message.

As Project Managers, you are inextricably tied to change. It’s part of your DNA. Pretty much everything you do is centered around the concept of change. Isn’t that what projects are all about? But what happens when the changes apply to people? Why is it so much more complicated?

“The world hates change, yet it is the only thing that has brought progress.” – Charles Kettering

Most of the time, changing our own behavior is difficult. Changing the behaviors of others, or of a group of people, can seem almost impossible. That’s because, as I’ve written previously, we tend to view change as a threat.

Think about this – a recent study on health trends showed that only one in nine people who underwent open-heart surgery were able to change their lifestyle, and these people had the ultimate motivation – possible death.

“Change before you have to.” – Jack Welch

Like the boss I referred to earlier, many times we tend to club people over the head with change, rather than engage them in the process and make it feel less threatening. In today’s business environment, and particularly in your role as PM, the work you’re doing is highly complex and non-routine. That, in itself, makes the carrot-and-stick approach to change completely ineffective.

So what can we do to get people to more readily embrace change? There are a few techniques we can use that are effective, available, and maybe most importantly – relatively or completely low-cost.

Most of the time, leaders tend to think that external rewards such as promotions, bonuses, or pay increases are the best way to motivate people to change. But, they have limited use, because you can’t continue to use them every time you want to engage people in change.

“Any change, even a change for the better, is always accompanied by drawbacks and discomforts.” – Arnold Bennett

Recent advances in neuroscience suggest that there are other, more effective ways to engage and motivate people in the change process. “The brain ideally likes to feel a sense of increasing status, certainty, autonomy, relatedness, and fairness.”*

The point is – change is hard.

But we don’t have to make it harder through the way we handle it. When we seek to understand the dynamics of change, and how people tend to view and respond to change, we can find more effective ways to engage them and ultimately to gain their full commitment to the changes.

* “Your Brain at Work,” by David Rock