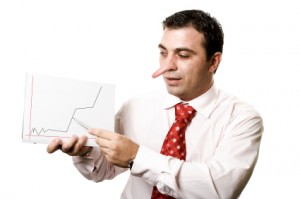 Well, this shouldn’t come as a big surprise to anyone, but I’m sorry to say I felt the need to put this one out there as one of the keys to success as a project leader.

Key success behavior #2:  Don’t Lie.  I recently had lunch with someone who’d been lied to by her manager three years ago.  As she described her sense of betrayal it was clear that she felt the sting as clearly as if it had occurred yesterday.  People don’t forget being lied to.  Although some people seem to find telling lies as easy as breathing (I’m thinking of sales forecasts here, mostly, but there are other examples . . .), most people feel a little alarm go off when they’re spewing untruths, and some even feel the need to take a bath afterward (like my family – we were raised Catholic – guilt was a biggee for us).  But that little tug from your conscious is nothing compared to the physical wave of disgust and dizziness that washes over a person when they find out they’ve been lied to.

There are no little lies.  OK, maybe if someone asks “Does this dress make my butt look big?”, it’s possible that saying “Gee, it looks great on you!  If you like it get it!” wouldn’t count as a lie.  But anything else pretty much counts.  This is about your personal integrity, not about project management deliverables, so I’m not talking about fancy marketing language that overstates the product performance or excessively optimistic predictions of meeting scheduled milestones.  I’m talking about destroying your credibility and undermining your relationships by saying things that are untrue.  One of my (former) teammates told several people that he taught me everything I knew.  Gosh, that would be a severe limitation if it were true.  Fortunately I knew a few things before I met him, and managed to learn a few things on my own since I met him.  Of course when I asked him if this was what he said he denied it, adding a second lie to the first.  I chalked it up to a simple misunderstanding the first time, but when something similar (much worse, actually, but too inflammatory even for a blog post!) happened with a third person I knew and trusted, I decided that I’d had quite enough.  It’s no big surprise that we’re no longer working together.

As I mentioned in the first post this week, your integrity and credibility are a great source of power to you as a project leader.  If you allow yourself to lie, or even flirt with telling “little white lies”, you are putting at risk the source of your power.  Sometimes you will fall into temptation.  It’s despicable to lie, and humiliating to be caught when you do lie.  It’s just not worth it.  Find a way to say what’s true for YOU.  When you speak from your heart about how you FEEL you are not lying.  For example, as a project leader you might have occasion to say “I had to make a tough decision and you are probably not going to like it, but it’s my responsibility, and I’m truly sorry for any negative impact that had on you.”  That’s way better than saying “My boss made me.”

One important distinction I’d like to make about this is that “Don’t lie.” isn’t the same as saying “Tell the Truth”.  The truth doesn’t always need to be told.  Sometimes your friend’s butt does look big in that dress.  Who cares?  Sometimes what you think of other people is none of their business.