The world recently lost one of the finest visionaries ever: Steve Jobs. Like many others, I feel compelled to say something about it. There will be two quick parts to this rant.  First, a note about how we unproductively think about our heroes in unrealistic and idealistic ways. Second, I would like to share a few things that Steve Jobs taught me.

Much has been written about Steve Jobs. He helped change several industries and he helped improve how humans communicate and consume information. He was also terribly human – thus imperfect. Predictably, some of the recent writing about him has focused on his ego, his temper, his youthful indiscretions (apparently he did not bathe much during his stint at Atari, he tried drugs, etc.), and his alleged adult indiscretions (e.g., the stock options backdating scandal). Here’s the thing: every great person whom we revere is imperfect. MLK, JFK, Henry Ford, Steve Jobs – you name it. They all had moments or habits they do not want you to know about. They were often very human. I am not justifying ugly behavior. Instead, I want you to see people as authentic, see them from a more complete perspective. When you see the real authentic person, not merely the idealized myth, they will motivate you even more. Why? Because, like you, they are flawed. However, if you work hard enough and perform well enough, like them, you can become more than flawed – you too can become authentic.

Okay – here are five monumentally important things Steve Jobs taught me. I honestly believe each can be useful for you, your teams, and your organizations.

2. You can be imperfect sometimes if you perform really well. While I stop short of justifying outright jerk-like behaviors at work, it is truly amazing how much one can get away with when you are good at what you do. Add a lot of value and folks give you a little room to be imperfect.

3. Personal branding is a meaningful part of success. What do you stand for and how do you convey that sentiment to others? Steve stood for, among other things, elegance of design…. and even his attire reflected that value. Simple shoes, jeans, black turtleneck. How about you? What do you stand for and represent? How does your attire, your words, and your behaviors and choices convey (or fail to convey) your brand every day?

4. Innovators often beat the creators. The inventors, idea guys, the creators – the mythical creative genius has often been the focus of our dreaming. That’s unfortunate since the creator and the innovator are different. The former creates whereas the latter ultimately adds value. Steve did not create the mouse, graphical user interfaces, the PDA, or the smartphone. While his name was on many patents, his monumental contribution to society was as an innovator – seeing the possibilities from another’s creation and marching forward to make the vision real.

5. You should allow your curiosity to drive you to explore. Don’t censor it! Steve dropped out of college, then “dropped in” to the classes he really wanted to take. Only then did he learn about calligraphy and the amazing fonts that later helped the Mac revolutionize personal computing. No matter what your vocation, sample life widely and you will find new ideas that will propel you forward.

Other advice: 1) watch the Steve Jobs commencement speech from Stanford University on Youtube – good stuff, 2) pick up one of the biographies and find out more about Steve: imperfect, sometimes impossible, very often amazing. Thanks Steve!!! 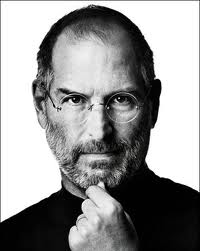