We have a wonderful German Shepherd puppy named Spice. She is black and brown and fuzzy… and did I say cute? Yes, she is very cute! Her rather large ears stick straight up from the top of her head, reaching skyward like two fuzzy antennae, searching for input. When she gallops around the house, her huge feet flop around beneath her, like a child wearing their parent’s shoes, struggling to keep them in sync, as they flip, then flop about with each step. It’s so adorably clumsy that you cannot help but chuckle every time she scurries awkwardly past. 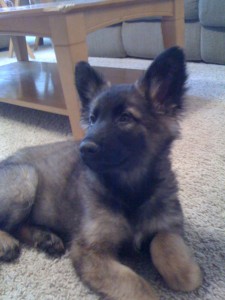 I was watching her play with a tennis ball this morning. She grabbed it in her sharp little puppy teeth and carried it around as though she were saying, “Look at what I’ve got!” She would drop it to the floor and watch it bounce slightly, and then pounce on it like she was the hunter, the ball her prey. She pushed it with her nose, rolling it about with her rather sizable paws, all the while totally engrossed in the playfulness of the moment, oblivious to anything else in the room.

Then, she walked over and lay next to the coffee table, and *poof* the ball disappeared beneath the lower shelf of the table, her long nose unable to reach under the 3-to-4 inch opening to grasp the object of her affection. She began whining and wailing and making every sort of crying noise I’ve ever heard a puppy make – and maybe even some I’ve never heard before. What a sorrowful lament!

Dutifully, I walked over, got down on my knees, and stuck my nose down to peer under the edge of the table to see her obsession. I reached under, grasping the ball in my fingers, gently pulling it out from under the table before saying, “Is this it, Spice girl? Is this what you’re looking for?” She excitedly perked up, tail wagging as if to say, “Yes! Yes! That’s it! You’re a miracle worker! You found it!”

I tossed it across the room and watched as she breathlessly scampered toward it; the clumsiness of her stride again evident, and I giggled quietly to myself, since there was no one else here. Then, she did it again. She plopped her lanky puppy body down in almost the very same spot, dropped the ball, and proceeded to nudge it back under the table with her nose.

Again, the wailing of intense sorrow began… “Oooooowwwww!!” And once again, just as before, I walked over, slumped my body down, and rooted out the incredible disappearing ball. How many times did this circular event replay itself? Well, let’s just say that the carpet burn on my knees serves as a testament to her persistence. And, maybe to my need to rescue her from herself… hmmm, wait a minute; what the heck was that?

Suddenly I saw the metaphor – it struck me as we played and replayed this comedic scene. She is doing exactly what so many of us do! She is repeating the same mistakes over and over again, and yet, expecting that somehow this time it will be different. This time, she’ll get that ball, and she will have conquered this seemingly insurmountable task! Einstein’s now famous quote came to mind, “Insanity is doing the same thing over and over again, and expecting a different result.”

How often do we do that very thing in our own lives? Every day, I become more aware of my own patterns, habits, and self-limiting behaviors that keep me howling and lamenting the “ball under the table.” But don’t I know better? Why would I ever want to stay in a place where I cannot move, cannot improve, cannot see the ball that I so desperately want? That, my friends, is the million-dollar question!

“All changes, even the most longed for, have their melancholy; for what we leave behind us is a part of ourselves; we must die to one life before we can enter another.” ~ Anatole France

The answer lies somewhere between the world of knowing, and not knowing. This, after all, is the devil I know. I know the outcome of these behaviors, and although they are not resulting in what I tell myself I really want; they also are not creating any major changes or moving me too far out of my “comfort zone.” But, if I were to truly change, shake things up, who knows what might happen then? As I’ve been known to ask clients – “How’s that strategy working out for you?”

So, what can you do? Well, I’m glad you asked! (You did ask, didn’t you?) The first thing you must do is become aware of your patterns. Get out of automatic mode, and into awareness mode! You know the things you do that result in stagnation and feelings of dissatisfaction. You know the habits that lead to poor communication, dysfunctional teamwork, and feeling insignificant in your work and with your teams. Uncover the thoughts that are driving those behaviors, because that is the real land of change. As you change your thoughts, you also change your behaviors. That in turn changes your results; and as your results change, your thoughts change. What a nice circular flow, wouldn’t you say?