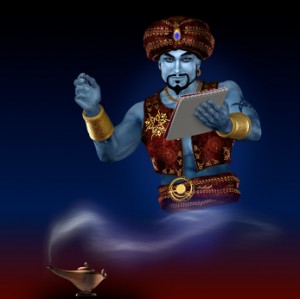 In the “Dear Diary #2” blog I made a commitment to re-engineer my relationship with my dad – getting unstuck from the past conversation swirling around in my head about him.  (Perhaps you made a similar commitment to doing that with a colleague or boss after reading that blog?)  After recognizing that the historical banter in my head was largely based on experiences over 3 decades ago, and some practice imagining a future relationship with my dad where we actually enjoyed one another’s company, I rang him up.  Surprisingly (to me) we had a rip-roaring time – chatting, joking, laughing, and planning to get together this summer for the obligatory family wedding reunion.  He lamented how my mom was “all over him” for using the “F word” too much (is there such a thing?), so I worked that into the conversation every chance I got just to kid around with him.  Hearing my mom shout “What’s she saying?!!” in the background over and over again, and him giggle with delight in response, filled me with glee.

It was one of the most pleasant conversations I’ve had with him in ages.  Maybe, through some strange act of synchronicity, my dad suddenly turned into a nicer human being.  But I think the change was mostly due to the difference in my attitude – my maintaining a focus on a future possibility for our relationship during the conversation instead of holding expectations based on the past.  Well, “that’s one in a row”, as they say.  I’m going to continue to fight the grip of memory and experience in hopes of creating a future relationship with my dad that’s truly extraordinary.  That should come in handy in my project management, too, where years of experience have grown in me a cynical attitude taller than Dubai’s Khalifa Tower.  My only fear in letting go of the past in the area of project management is that I won’t be as funny in my keynote speeches without all of the negativity.  (OK, maybe I can dredge up the cynicism when I’m on stage just for entertainment purposes.)

With the past no longer blinding us, let’s move on to the next step in improving communication skills – conjuring up action.

As you can imagine, I didn’t really look forward to the conversation with my dad.  I was afraid it would be just another disappointment.  But since I had committed to calling him, I did it.  That’s the power of commitment.  It moves people to action.  “Wishing and hoping” don’t even come close!  “I’ll try.” is a phrase I dread.  Give me one solid commitment over a pocket full of wishes and mumbled half-promises any day.  At least I know where I stand if my request is flatly turned down.  At least I won’t waste days waiting for something to happen only to find out at the last minute that it’s not going to be done, leaving me with few – or no – options.  At least I can make other plans.

“No answer” is almost as bad.  A request that receives neither a yes or a no just hangs out there in outer space like a forgotten ornament on a discarded Christmas tree.  I’m never sure if I should ask someone else, repeat my request, or just wait patiently for an answer.  A “No way!” is way better.

Because I’m the most responsible lunatic I know, and so many other people’s work depends on my doing my job, I’ve become a bit of a tyrant with myself about making and keeping commitments.  Sometimes it’s a little exhausting because I make a commitment when I feel well-rested and energized, and then I have to keep the commitment when I’m feeling like something the cat just dragged in.  Just yesterday I was using my 2 minutes of whining per day to lament how “That dang hyperactive Kimberly went and agreed to do this presentation, and now I’ve gotta up and DO it!”  Sometimes I feel as if someone has broken into my office and put all sorts of stuff on my calendar that no reasonable person would agree to, and I have to clean up the mess.  Of course it’s me making the commitments, and keeping them is something I take very seriously no matter how I feel.

Why bother?  Because your words are your power to conjure reality.  Long ago I heard a woman with a chronic disease that occasionally left her temporarily blind or paralyzed speak about how she’s learned to live out of her commitments, not out of her feelings, in order to avoid having her disease sap her power in her life.  No matter how she feels, she does what she promised to do if humanly possible.  That inspiration stuck with me.

If you start using your words carelessly you’ll find your power to create and shape reality slipping away.  The more clear you are with your commitments, the more power you have to create the reality that you intend.  And when you stop settling for vague indications of what you can expect from others you’ll quickly clean up many of the problems plaguing your project execution.

It’s been said “The fortune’s in the follow up.”, but that’s Step 4.  Experiment with making and keeping clear commitments, and settling for nothing less than that from others for the things that matter most.  If it doesn’t matter, “I’ll try.” is perfectly fine.  But if it matters, ‘try’ not to say that (yes, that’s a joke, in case you’re wondering).