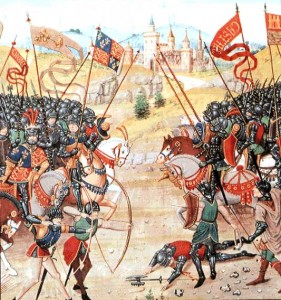 In this entry we look at a project conflict resolution tool and relate it to a recent interesting but little-publicized news event which is funny in a way, but very, very sad in a much deeper way (excuse the pun).

The tool is the Thomas-Kilmann model, which sounds very fancy and hard to understand but is actually very straightforward, powerful, and applicable to your role as a project manager in understanding and dealing with conflict.

And you know that as a PM you will deal with conflict.

Why?  Here are three main reasons:

1. Recognize that conflict will exist and that these aspects (assertiveness and cooperativeness) contribute

2. Recognize the type of conflict you have and when the various types of resolution work when you are an arbitrator

3. Same as above for those times when you are a party in a conflict.

Looking at the chart you can see that there will be times – times of urgency – where the PM will need the competing role and ‘lay down the law’ and direct the project team.  Perhaps the more steady-state role of the PM is in the collaborative area – at least in assuring that this is the area in which your team is working.

There’s alot more.  See an amusing post with much more on this topic, from our sister site ScopeCrepe , here.

Now let’s move on to that news story we mentioned up front.  Here’s an extract from the AP (Associated Press) news story:

NEW DELHI, India – For nearly 30 years, India and Bangladesh have argued over control of a tiny rock island in the Bay of Bengal.  Now rising sea levels have resolved the dispute for them.  The island is gone.

New Moore Island in the Sunderbans has been completely submerged, said oceanographer Sugata Hazra, a professor at Jadavpur University in Calcutta.  The disappearance of the uninhabited isle has been confirmed by satellite imagery and sea patrols, he said.  “What these two countries could not achieve from years of talking has been resolved by global warming” Hazra said.

See the map below to locate this (former) island, called New Moore by India and South Talpatti by Bangladesh.

Scientists have noted a dramatic increase in the RATE at which sea levels have risen – not the rise, but the RATE of the rise – until 2000 the rise was about 0.12 inches a year, but in the last 10 years it has nearly doubled to 0.2 inches per year. Ten islands in the area, some inhabited, are at risk. Lohachara was an inhabited island which was already submerged, inhabitants having to move onto the mainland in 1996. Estimates by scientists say that 18% of Bangladesh’s coastal area will be underwater by 2050, displacing about 20 million people.  You can read about this in an article from the UK newspaper The Telegraph, here.

So – how do you choose to resolve conflict?  Perhaps you can just wait until climate change causes your project to go underwater.  But we recommend using a measured, practical approach with the advantage of the knowledge provided by a careful analysis, perhaps using the Thomas-Kilmann model.

Read more about the intersection of Green and Project Management at our site: EarthPM.com.  Also note that our book, to be published by CRC Press, is coming out in September.